Gemmology is an exciting discipline, especially those days when so many new gems varieties are found all over the world. One of those newly discovered stones is Ethiopian Welo opal. 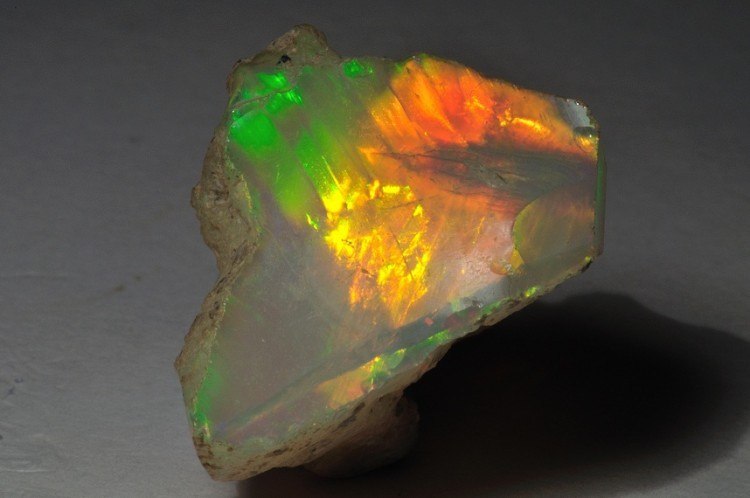 It appeared in 2008 near Wegel Tena, a small village in the Tsehay Mewcha region of Welo province, Ethiopia. This exciting new gem didn’t take long to travel 550 km south to the capital Addis Ababa and further into the world. Not the first opal to come from Ethiopia but the first one that was stable enough to cut.

Map plus a satellite image of currently mined deposits.

Mining as of today remains in hands of local population, distributed further through licensed dealers only. The government of Ethiopia in it’s bid to shield the production from outside influences has restricted access to the area with numerous check points on local roads, thus foreigners wishing to visit the dig sites must obtain a proper ministerial authorisation. Otherwise they risk spending a few nights in Ethiopian jail. Whether these measures are in place for the welfare of locals or merely a way of ensuring that the pipeline and associated profits stay under control of the government is a separate matter… 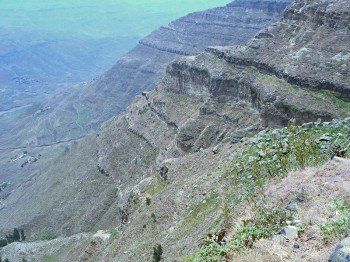 Deposits are not fully surveyed yet, with all current production extending over a couple of kilometres along the edge of a river canyon some 17 kilometres north of Wegel Tena. At about 10000 ft above sea level local miners must descent a 1000 ft from the top of plateau into the canyon via narrow sharply descending footpaths. Inaccessible to vehicles or animals, miners are forced to carry all the necessary equipment themselves each day. It is probably one of the reasons why only rudimentary extraction techniques with simple hand tools are used. Rough terrain conditions, coupled with a lack of mining experience caused numerous accidents in the past with around twenty people dead so far. The situation has improved after the Ministry of Mines and Energy initiated a series of training sessions and provided some basic safety equipment.

Geologically the region is composed of a horizontal layers of volcanic basalt and pyroclastic tuff. Remains of ancient volcanic eruption. The whole Welo opal deposit is contained in just one of these tuff layers, in cavities between volcanic debris. Bringing us to a conclusion that the whole opalization process occurred between those two volcanic events as no other layer,above or below, shows any signs of opal presence. 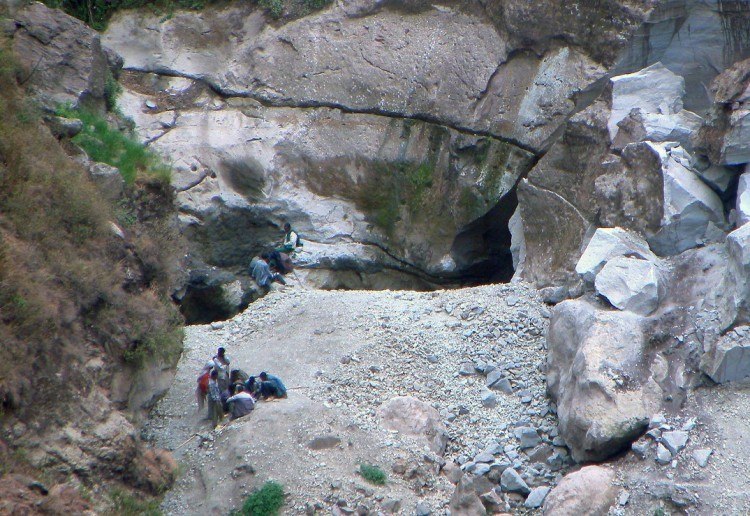 Local miners at one of the sites enjoying short rest. Photo- The Village Smithy Opals Inc.

The extraction of Ethiopian opal from this deposit is unique in other respects as well. The host rock being porous is slightly moist. After digging opal out, the miners allow it to dry for a couple of days in the sun, before presenting it to the dealers. This process is characteristic to Ethiopian opal. In other localities miners will usually try to protect the opal from sudden drying. This difference is caused by the hydrophane character of this material. It allows water to be absorbed into the stones making them transparent and loose the play of colour. Miners are thus unable to asses the quality of their find right away. 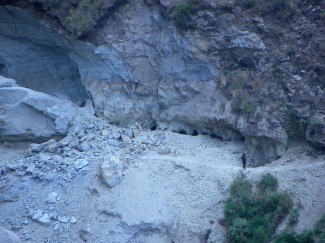 One of the dig sites with an apparent lack of vertical support creating danger of a collapse. Photo. The Village Smithy Opals, Inc.

Hydrophane feature of Ethiopian opal is quite unique and causing a range of specific issues during cutting it into finished gems.

Opals are traditionally cut wet to limit the amount of harmful silica dust and control the temperature that may cause your gem to crack due to the localised thermal expansion. However, cutting Ethiopian material wet will make you unable to see how pattern of colours is being revealed. Some cutters choose to cut this opal dry, taking advantage of its greater softness in comparison to the Australian stones. This requires a great degree of care as overheating will obviously make this opal crack, same as any other variety. Having a good ventilation and wearing a mask is also necessary, due to the risk of Silicosis- permanent lung damage caused by breathing in microscopic silica particles, which lungs cannot expel. 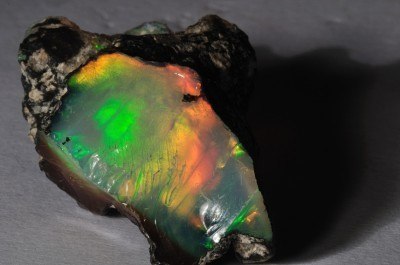 Ethiopian opal often comes in irregular shapes, occurring in veins and masses with sharp edges and the host rock often going deep into the opal mass. This causes a low yield during cutting, as one must grind deep into the stone to obtain a traditional cabochon shape. It makes free-form cutting and carving more appealing with this gem.

Welo opal is not commonly treated but due to its porosity it is susceptible to being dyed and first experiments in that direction had already been conducted.

So far the colour tends to seep out during subsequent hydration, possibly because appropriate dye has not yet been found. Another process relying on porosity of Ethiopian opal is smoke treatment. Stones produced this way strongly resemble natural black opals, but can be recognised by the colour concentration in cracks and burn marks. Most telling; however, is 1150 cmˉ1 peak in Raman readings, indicating an amorphous C-O bond. This treatment has been reported as stable with colour evenly  penetrating whole stones. It produces opals that may be regarded as natural without appropriate testing. Ethiopian material can also be fracture filled or coated with epoxy resin and that would seal it against the water, thus preventing the hydrophane character from being an issue. Oiling has been attempted as well, but it was quickly discovered that it has a detrimental effect on the play of colour.

According to some dealers black opals have also been found. These are extremely rare and we didn’t get an opportunity to examine one by ourselves. Most stones are hydrophane- highly hygroscopic. They become more transparent and loose their play of colour after immersion in water. In addition, there’s effect of gaining 5% to 10% in weight. Those effects are fully reversible after drying, which can take a couple of hours or a couple of days, depending on the temperature and humidity. At this point, it would be appropriate to mention that the porosity of these opals causes them to soak all sorts of liquids. Including oils, coloured drinks and also RI liquid used in gem testing. A degree of care is necessary when handling and testing this material, as permanent staining is possible.

Inclusions are not common with most stones being clean, however some rough samples show two dimensional brown CRYSTALLISATION on the surface.

Identified by GIA tests as barium-manganese oxides. In some cases they can present within opal body as dendrites. Apart from these, some opals contain small black crystals- probably pyrite, plus native carbon, grains of host rock and other dust like black particles resembling ash. Inclusions are therefore consistent with their volcanic origin, as are some of play of colour features. 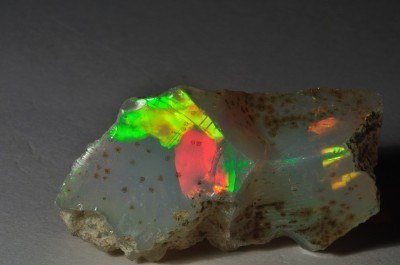 Radial brown crystallizations on the surface of a rough sample.

Taking into account the sequence of seismic activities which has led to the accumulation of the host rock. We can hypothesise on conditions that caused some of the distinguishing features of Welo.

Namely, the so called honeycomb patterns- columnar structures of precious opal, that are perpendicular to the accumulation layers. Such structures are normally found in synthetic opals and that raises a question about their genesis. The currently accepted theory is that originally, opal was allowed to settle, forming a uniform structure during a very stable period. It then weathered or was shattered when a subsequent seismic activity occurred. It was then “glued” together by another opalization event, resulting in precious opal fragments being suspended in potch or precious opal of a different colour. This structure,when cut in a correct manner, can give a honeycomb resembling pattern. Another specific feature of those opals is their ability, exhibited by some samples, to show multiple spectral colours within a single patch, creating a rainbow effect. This is not usually observed in opals from other deposits, where a single patch can show one colour at a time. This is probably caused by a curved or multi layered structure of silica spheres within those patches. 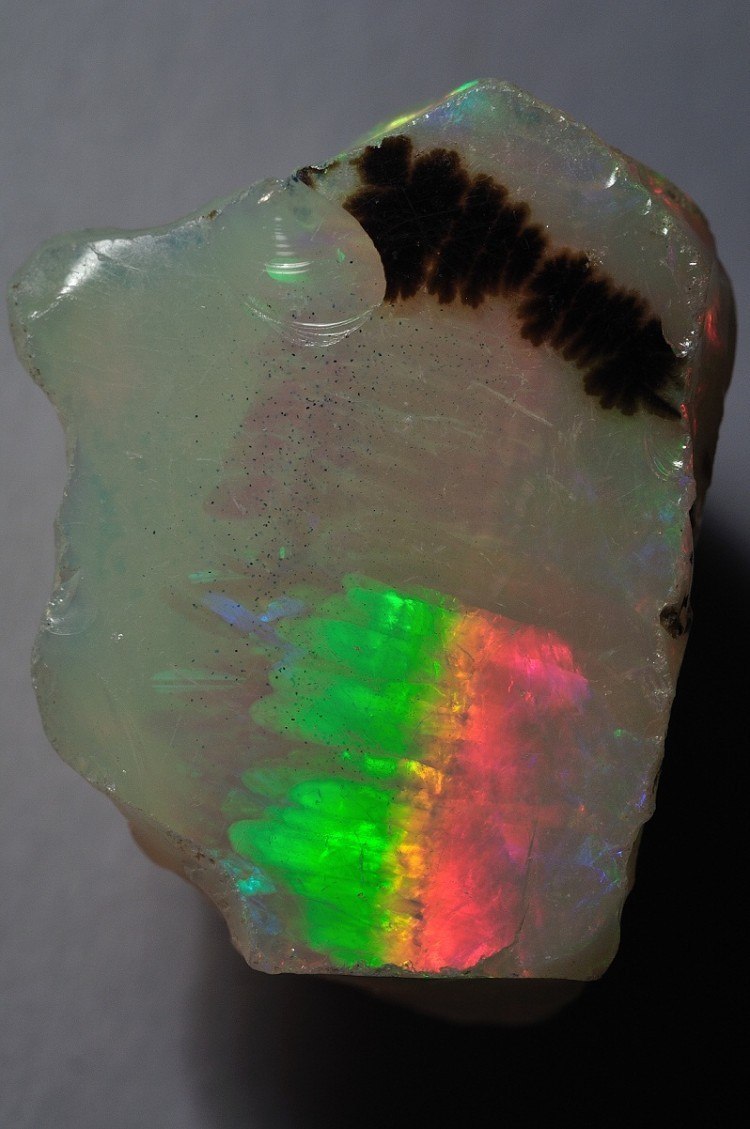 Just as many other volcanic opals, Welo belongs to opal CT group. Its composition on microscopic level is partially crystalline. In precious opals this usually means bladed lepisphere structure. Which gives a specific Raman spectra with peaks at 1470, 1084, 974, 785 and 357 cm-1, confirmed by GIA research. An extreme example of this can be one particular cabochon encountered by Fritsch and Rondeau. There were no separate patches of colour, instead it had points of diffraction moving across the surface, changing colours as the stone was rotated under a light source. This means, its internal structure is homogeneous, causing a perfect diffraction- a very rare specimen of natural photonic crystal. Although stones presenting mentioned structure are rare, we were able to acquire similar sample by a pure luck.

Specimen with photonic crystal properties in our collection.

Standard gemmological tests show UV reaction to be generally weak/moderate, whitish without the green phosphorescence characteristic to Australian opals. It’s due to the absence of uranium in Ethiopian opal. As with opals from other localities, yellow, orange and brown stones do not fluoresce at all. RI generally falls between 1.36 and 1.52, sometimes even varying within the same stone. Probably as a result of changes in internal structure. The spectrum doesn’t show anything specific with general absorption in the violet end, extending to blue and sometimes green, increasing with the sample’s thickness and darkening of body colour. CCF shows stones to be inert, as it’s expected, unless the light is transmitted, in which case they show reddish tint due to light scattering. None of the test samples have shown any reaction under the polariscope.

What makes Welo opal gain popularity those days, is the fact, that most stones show a broad range of colours with red being more common than blue, on a contrary to the Australian opals.

Good quality Ethiopian stones can easily score between 4 and 5 on opal brightness scale. They may compete in that respect with the best material on the market. Additionally Welo tends to exhibit neon like flashes, with its fire appearing more 3D than the one seen in the Australian opal. The attractiveness of Welo opal is further increased by the fact that its price at the moment, although going steadily upwards, is still a fraction of what similar Australian opal would command. On the downside Ethiopian opal has its issues with liquid absorption that present special care requirements. Although it will recover its original appearance after water immersion some care must be taken where other, especially coloured, liquids are concerned. Welo opal must also overcome the bad reputation of previously discovered Ethiopian Shewa opals. Those had a large percentage of unstable, cracking stones. From our experience this is not an issue with opals from Welo region. Especially if obtained via reputable dealers, as those will remove any unstable material, that can be found but constitutes a tiny fraction of opal extracted. Unstable material usually exhibits strong reactions to weather conditions (mainly humidity) sometimes becoming whitish on the surface, sometimes developing a translucent “yolk” in the middle. All of our specimens remain stable, regardless of being kept dry or repeatedly soaked and dried. GIA research shows that Welo opals are actually tough, being able to withstand a fall from 1.5m on a concrete floor.

Gradually the market should understand the value of Ethiopian opal and the price is expected to rise further. This may be offset by surveying of new deposits. Opals have already been discovered 40 km from the current location. Reportedly at a similar depth, suggesting a great extent of the opal bearing layer.

With a bit of marketing effort and careful right mining strategy, Ethiopian opal will succeed in the market. Thus, providing fine quality stones for a long time.

The author thanks Eyassu Bekele from Opalinda and Rod Quinert from Indigo opals for all invaluable information provided, Steve and Darlene Newstrom from The Village Smitthy Opals, Inc. for their assistance and pictures.