Opals at the Munich Show

15 Nov Opals at the Munich Show

Opals at the Munich Show

In Europe, Germany is viewed as a strong market for opals. It also has a long tradition of being a lapidary centre for the continental Europe. No wonder then, that the Munich Show attracts a great variety of opal vendors from around the world. This year, most of the stands selling opals were located in the Mineralworld hall. Sellers were mostly divided by the origin of the stones, with most specialising in either Australian, Mexican or Ethiopian gems.

One of many Australian opal displays, dazzling with wide selection of gem grade black and boulder opals.

Due to their specific look, Mexican opals are usually more of a competition to other coloured gemstones than Opals from Australia or Ethiopia.

Most of Mexican stones do not have a play of colour, drawing their strength from an attractive body colour instead. It can vary from a deep red to a yellow but usually it is a nice shade of orange. The best stones are transparent and usually get faceted. While most of translucent material is cabbed and considered a lower grade unless it exhibits a play of colour. Out of the three locations mentioned above, Mexican opals constituted the smallest percentage at the show. There were only a couple of stands offering them, mostly as loose stones but also in finished pieces of jewellery. Sadly, Mexican rough material for cutting was basically non-existent. We suspect the situation may be a bit different at the upcoming Tucson Show, as it is much closer to their place of origin. 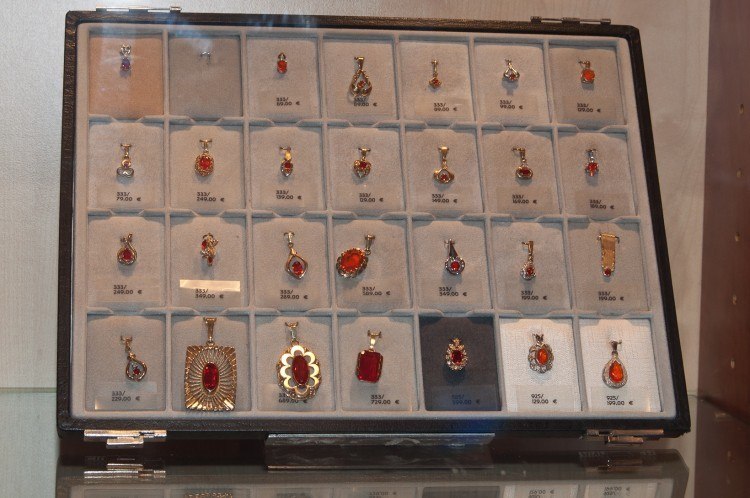 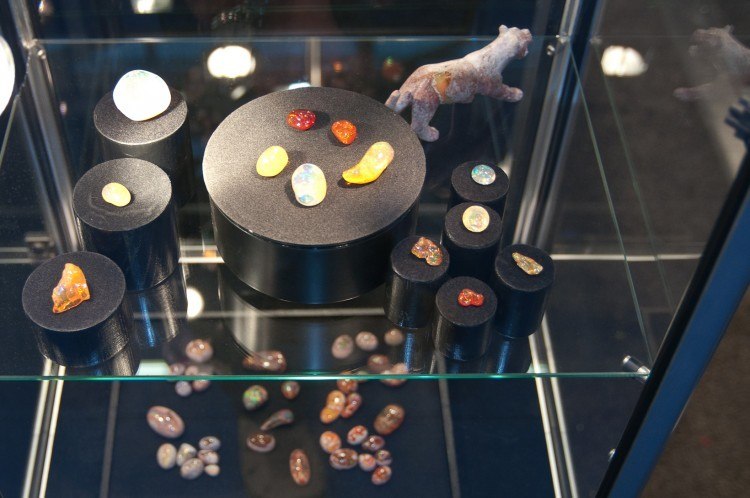 A collection of cabbed, carved and tumbled Mexican Stones in Munich

Australian Opals were present in strength, mostly as loose cut stones, but there was a great number of finished jewels on sale too.

The prices of black opal were high, despite the recession, as the Lightning Ridge production is low, plagued by high fuel prices and in need of new, unexploited fields. Any gap created by short supply of black opal in the market, seemed to be filled by boulder opals from Queensland. Mostly available as a mosaic of precious opal and an ironstone or a sandstone. Those stones are interesting and attractive, but no match for best gems from Lightning Ridge. There was; however, a number of boulder opals of finest quality present. With full opal face and ironstone at the back, they looked virtually identical to  black opals in appearance. Their prices were likewise in the same range. There wasn’t much of a white Australian opal to be seen, it may be a coincidence or the effect of Ethiopian opal appearing on the market. Good Australian rough was scarce like a water in the desert and equally expensive. It was quickly sold on Friday morning and the general public could only pick from some mediocre stuff on Saturday and Sunday. 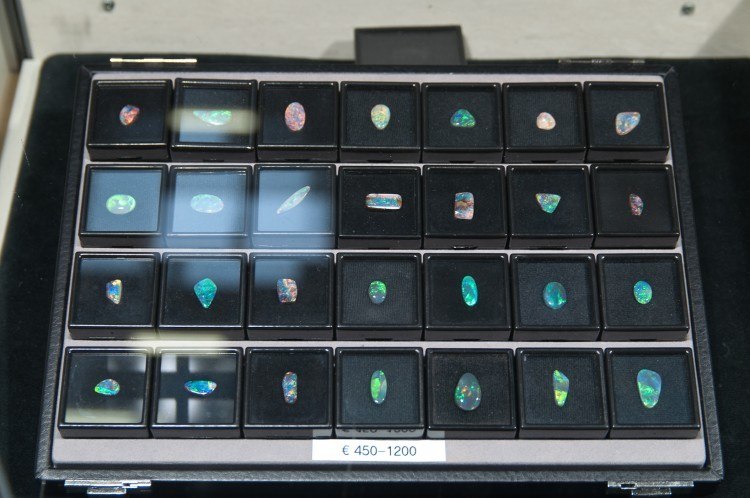 Some nice boulder and Lightning Ridge opals in this cabinet… 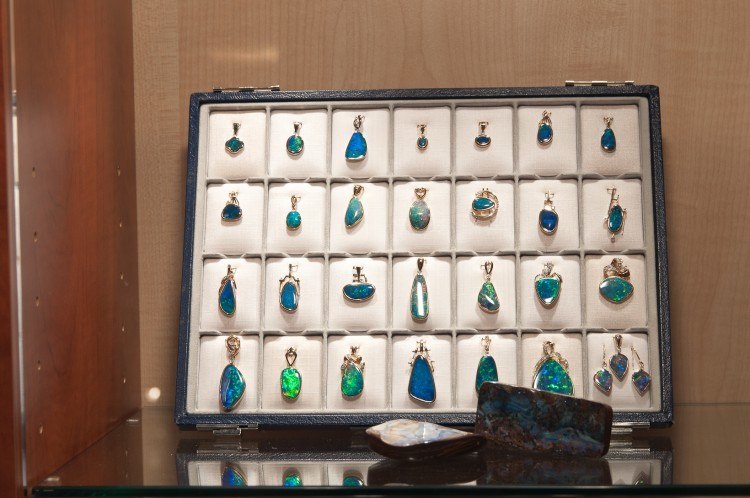 Black opal pendants. Prices were a bit steep around that level of quality but still far from best stones that could reach as high as 35000 Euro… 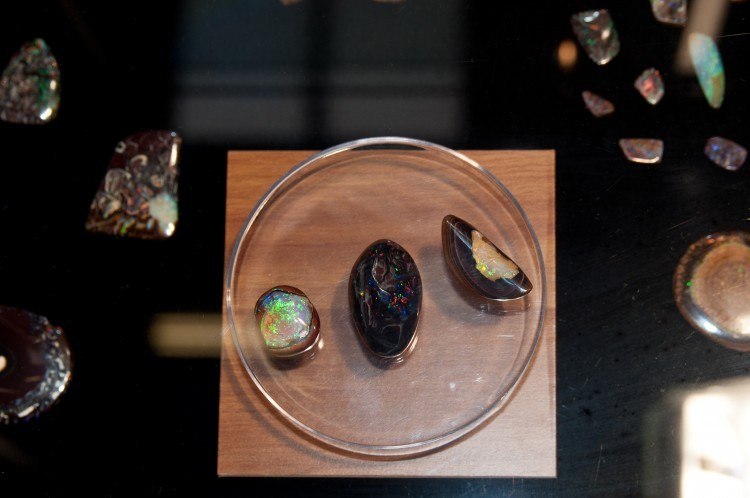 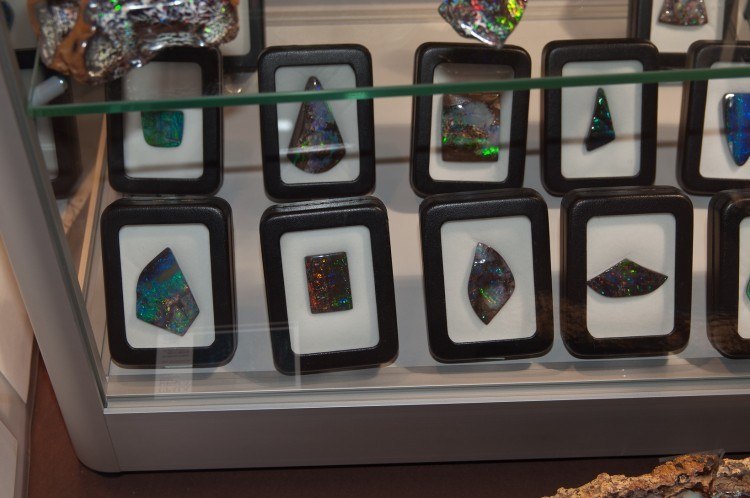 Ethiopian Welo opals were being sold by many vendors. Mostly as rough stones, with a smaller quantity of already cut gems also available.

Occasionally you could spot them alongside Australian opals, usually on German merchants stands. Great majority of cut opals were sold loose and there were only a handful of complete jewellery pieces. Rough material varied greatly in size, price and quality, so knowledge of rough opal and some haggling skills were necessary. There were a couple of instances where we’ve seen smoke treated Welo sold as natural black but majority of them were high grade and untreated. Smallest size material was sold at more or less same prices as in previous years, but larger, good quality stones were approximately 4 times more expensive than two years ago. A result of a popular demand and some mining restrictions in Ethiopia. Noteworthy is also Ethiopian Shewa and Welo Opals presence at “The African Secrets” exhibition among other beautiful gems of that continent. 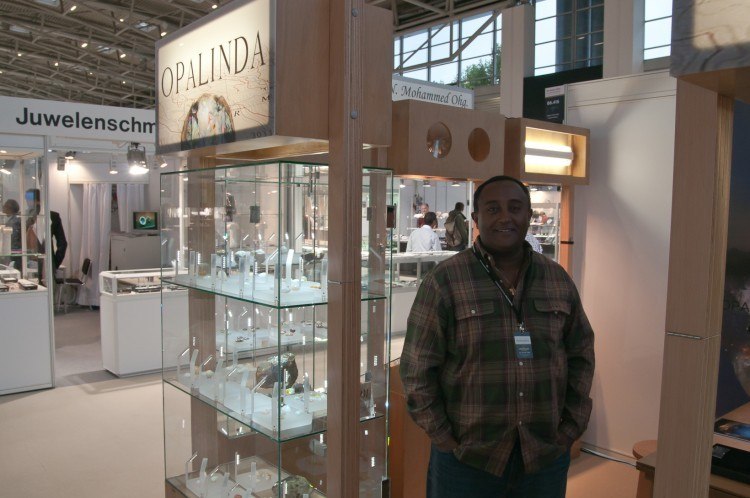 At the Munich Show we had an opportunity to meet our friend, Mr Eyassu Bekele from Opalinda, one of the pioneers of the Welo Opal market. 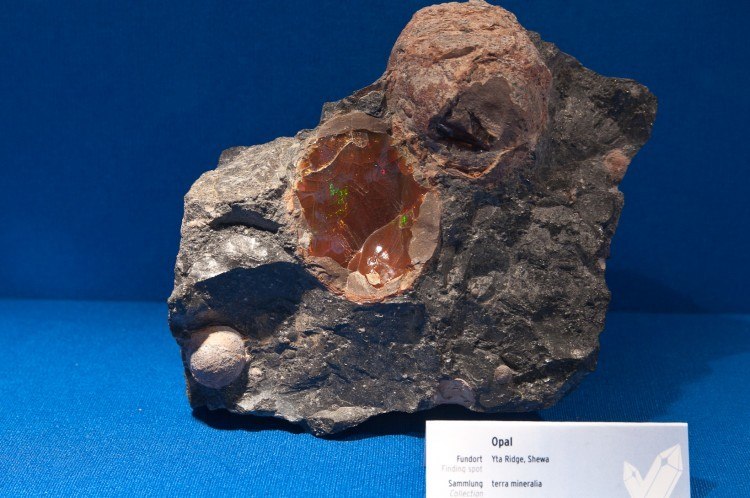 Large specimen of Shewa Opal in matrix at “the African Secrets” exhibition. We can see the “crazing”, characteristic of most Opals from that region, which unfortunately makes them suitable as specimens only. 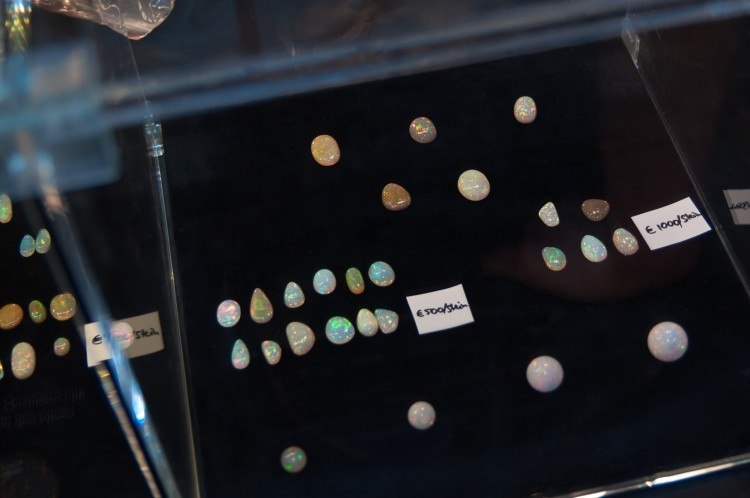 Welo cabochons at one of the stands. 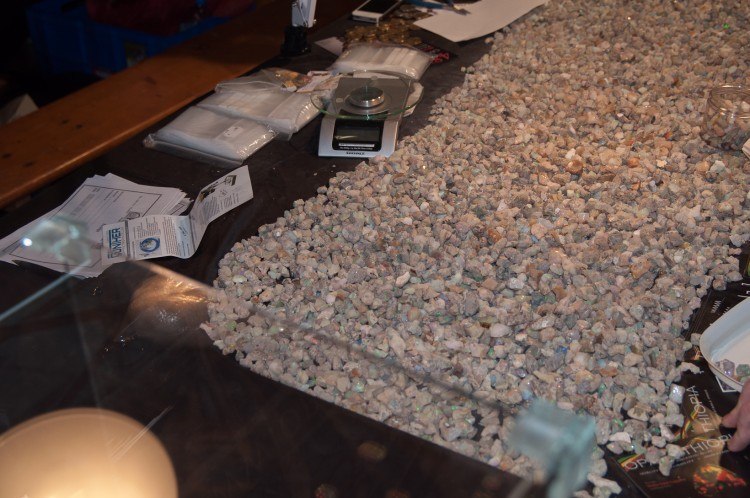 One of the stands, specialising in small size Ethiopian opal rough.

Summarising I must say that opals were a single most represented kind of stone at the Munich Show.

They had the largest number of dedicated stands and were being sold by many coloured gemstone vendors as well. That fully confirms this gems’ long standing popularity on the German market, a trend which we would like to promote in other countries. General public often have a mental image of opal as an uninteresting white stone without much of appeal. This happens, in a large part, due to big jewellery corporations that like to mass produce jewels. They usually prefer identically looking, cheap, calibrated size stones and that is what most of consumers are familiar with. Shows like the one in Munich and a growing popularity of online gem and jewellery stores are slowly making people discover how a true top quality opal really looks like.
Robert Zdeb 2012

Homepage of The Munich Show https://munichshow.com/en/