Spessartite garnet variety is distinguished by its vivid orange fire. The most prized stones are pure medium orange, sometimes described as “fanta” or “mandarine” but as with other garnet subspecies, there are a lot of Spessartites that contain molecules appropriate to different species of garnets. As a result there are many stones with a varying degree of red hue present (Almadine molecule) as well as those that depart towards the yellow. 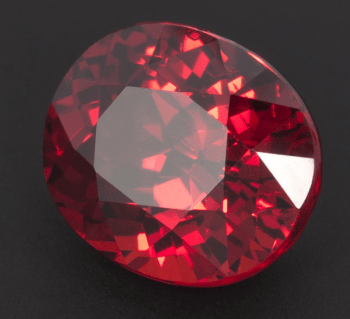 Deep red with a trace of orange in this Spessartite. 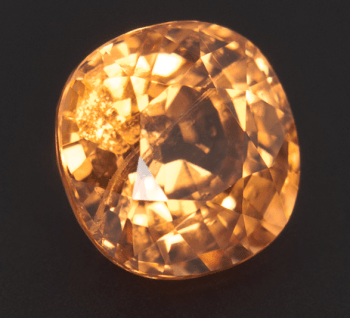 A mix of strong yellow and light orange in this stone.

The unusually strong brilliance, exceeded only by Diamond, Zircon and Andradite is surely one of the main reasons why this gem has gained popularity so quickly. Spessartite garnet shines brightly even in subdued light and its vivid orange is among most attention-catching colours. If you look for a jewel that will attract with its colour and sparkle, spessartite is a good choice for you. The name Spessartite (also called Spessartine) comes from the German “Spessart”, an area in Bavaria where it was first discovered. Currently Nigeria, Madagascar and Sri Lanka are the main suppliers but there are other localities producing varying amounts as well. Before 1990’s Spessartites were mostly collector stones, mined in Virginia and California. In 1991 however, other deposits were discovered in Namibia and the quantity became sufficient for this gem to enter a wide retail market. Following the Namibian find there was a significant new source discovered in 1999 in Nigeria, producing even greater amount of good clarity material. Bear in mind however that Spessartite deposits can be exhausted preety quickly, like the Namibian source which was depleted in just a couple of years. This results in a marketplace that gets used to this gem being available but it may not be the case forever and Spessartite may well go back into the rare collector status again. The fluctuating availability of Spessartite is in my opinion connected to its occurrence and formation. The main source of these garnets are veins of pegmatites- a granite type of rock resulting from hot magma intruding into other types of already solidified rock. To find Spessartites we have to find those veins first but it is not enough, we also need to find the ones that had a sufficient level of Manganese present as this is the chemical element that gives Spessartite its rich orange colour. As is the case with many gemstones, these garnets are sometimes also found in alluvial deposits of ancient rivers that washed them out of their host rock and transported them downstream over the millenia. Spessartites are normally not heavily included so obtaining reasonably clean stones is possible, still fine quality Spessartites over the size of 5ct are fairly rare. The exception from the usual clarity rules are Namibian stones which often contain fibrous inclusions of tirodite that gives them “sugary” look,that is not viewed as a flow as it disperses the light inside of gem. This counters the extinction and makes them appear more brilliant. In the case of Namibian stones, everything over 1-2 ct is considered rare and over 5ct is scarce which is reflected in their price. 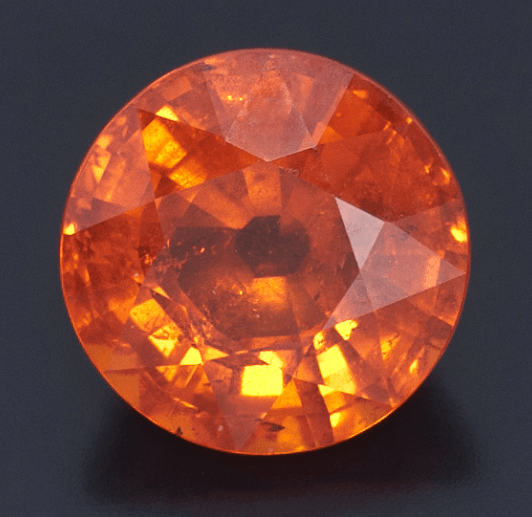 This vivid orange Spessartite has the “sugary” look caused by microscopic inclusions. Although not perfectly clean, this gem benefits by having its extinction diminished. This means more light return with virtually no dark areas in this stone.

Spessartite garnet belongs to the cubic crystal system and do not display pleochroism, meaning its colour is exactly the same from every direction and this in turn allows crystals to be cut at any orientation, giving cutters good yields from rough material. An additional effect of that is a broad range of shapes available- rounds, ovals are most popular but cushions, hearts and pears are available too. In that respect, Spessartite is unlike many other stones that must be cut at certain orientation to display prime colour, resulting in narrow range of traditional shapes. Although not as hard as Spinels, Corundum (Ruby,Sapphire) or Diamonds, Spessartites are quite durable at about 7.25 on Moh’s scale. They should cause no trouble with daily use if not subjected to rough treatment, such as manual labour, sport or other activities that may result in significant abrasion or knocks. To clean your Spessartite I recommend warm soapy water and a soft brush, ultrasonic cleaners should be safe, if there are no liquid inclusions present but do not use steam cleaners as sudden, large temperature changes may shatter your garnet. Thankfully there are no synthetic Spessartites currently on the market, probably due to the complicated chemistry of the garnet family. No treatments are currently being used on these gems, although there is still a possibility of imitations, with two most common being a glass and Hessonite garnet.

Browse our selection of Orange Spessartite Garnets at Treasurion.com

Browse our selection of Red Garnets at Treasurion.com

Browse our selection of Pink and Purple Garnets at Treasurion.com

To learn more about Pegmatites go to Wikipedia http://en.wikipedia.org/wiki/Pegmatite