Tourmaline Guide, its history and properties. 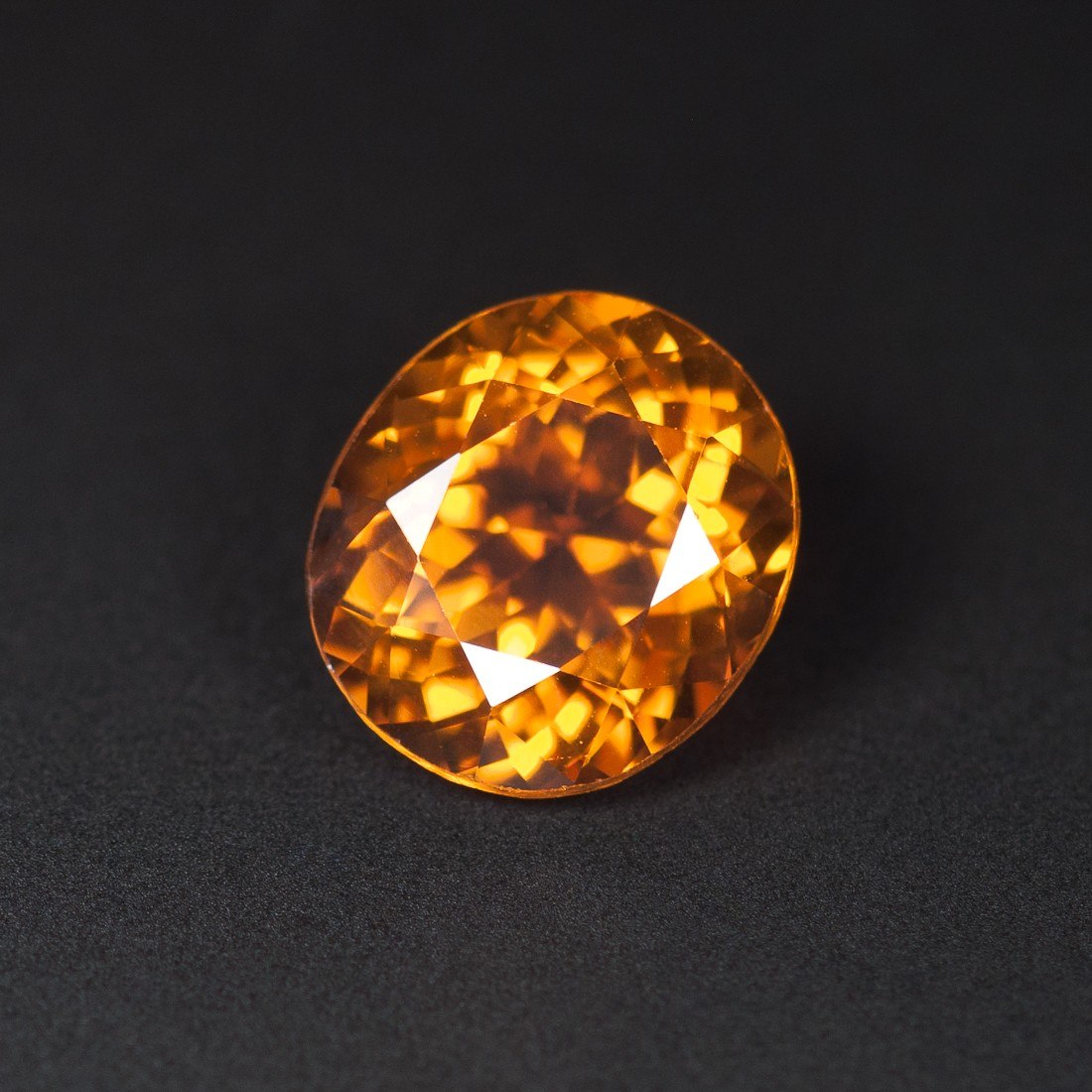 Tourmaline is a crystal boron silicate mineral. There are twenty seven members of the group as recognised by the International Mineralogical Association but only two are normally used as gems.

It belongs to the trigonal system and typically appears as a three-sided prismatic crystals, with either flat or hemimorphic terminations. Prism faces often show striations parallel to the length of the crystal and are usually convex, resulting in a rounded cross section. Many tourmalines show uneven basal cleavage and partially healed, often liquid filled fractures.

Most of gem quality stones belongs to either elbaite or dravite species and often are multicoloured. Amazing variety of hues, in which this gem is found, comes from the fact that it belongs to isomorphous type of minerals. As it is formed within the earth, one chemical element can replace another, while the crystalline structure remains unchanged. This gives tourmaline the largest colour spectrum of any type of gemstone. One of clear advantages of this gem is the fact that there are no synthetic stones available. You can therefore be sure that your gem is natural. Treatments of tourmaline are possible but not common. They are permanent in nature and do not affect the value, so there usually is no incentive to preform them.

Most commonly distinguished varieties are:

– Rubellite, a red-pink elbaite group member, coloured by manganese.
– Siberite, a name occasionally used for purple stones.
– Indicolite, blue to bluish-green stones from elbaite group, found in Brazil and Kunar province of Afghanistan.
– Paraiba is elbaite group member coloured by copper and manganese. Best stones show electric neon blue, are extremely rare and sought after. In 1990s Paraiba type stones were found in Nigeria and recently in Mozambique as well. While these gems are in general less saturated than those from original source, they tend to be cleaner and are often found in bigger sizes.
– Chrome tourmaline is an emerald green dravite variety found in Tanzania, coloured by chromium and vanadium. Rare and highly prised.
– Verdelite, all green stones, not coloured by chromium.
– Watermelon tourmaline is a name given to stones cut from a crystals that are pink on the inside and green on the outside.
– Bicolour tourmaline has two or more colours along its length.
– Schorl is a name given to the black variety that constitutes of about 95% of all mined tourmalines.
–Achroite is a variety that does not posses any colouring trace element in its structure and has a glass-like appearance. 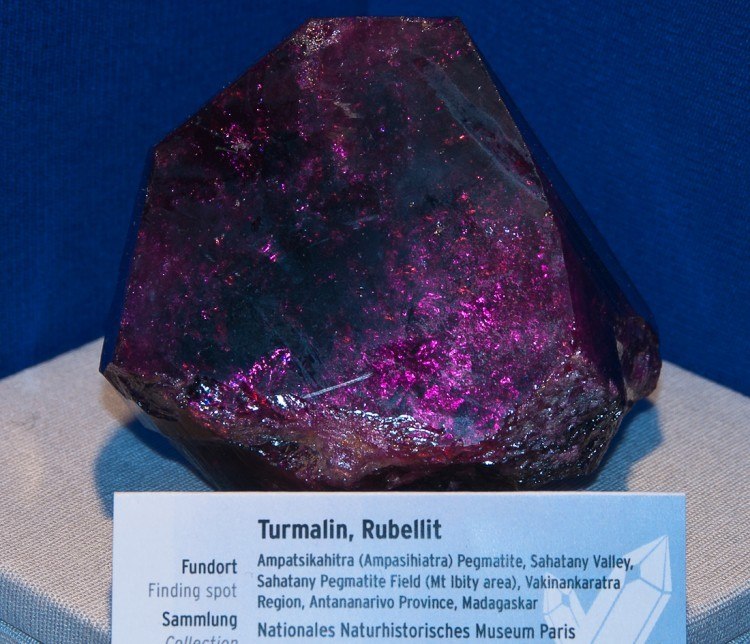 Tourmalines are 7 to 7.5 on Moh’s scale of hardness and therefore suitable for everyday use if a minimal care is applied.

They exhibit pleochroism, meaning their colour varies, depending on the angle at which you look at them. Some varieties show this phenomenon quite strong while in others it is barely noticeable. Most kinds of tourmaline are not that rare, so obtaining clean stones shouldn’t be a problem. In terms of size it is a very forgiving stone. Bigger crystals are not as rare to come by as those of many other gemstone varieties. The price per carat is rising slower as a result. However, you should remember that paraiba and chrome tourmalines, are rare and can reach very high prices, even in small sizes.Tourmaline also exhibits some special properties that helped it to gain popularity when it was first introduced. The first one to be discovered was pyroelectricity, it causes crystals to become electrically charged when warmed. The other is piezoelectricity, a property that generates electrical charge when pressure is applied.

The name “Tourmaline” comes from the Sinhalese word “Thuramali” for mixed gems.

The first record that we know of, came from the Greek philosopher Theophrastus. He mentioned a stone found in the island of Cyprus that had one end green and the other one red. Such colour combination is not found in any other gemstone.

Pliny the Elder who is otherwise famous for writing “Naturalis Historia” mentioned coming across violet and brown stones. He described their property of attracting small bodies when heated in the rays of the sun or by friction. This therefore must have been a tourmaline.

In modern times they were first brought to Europe as “mixed gems” by Dutch East India Company from Sri Lanka. Not surprising as before modern Gemmology was developed, traders were not able to distinguish tourmalines from other gems. Joannes de Laet in 17th century mistook verdelites sent from Brazil for emeralds. Russian state crown contains many rubellites, that were once thought to be rubies. A mistake reminiscent somehow of the Black Prince Ruby in the English crown, that is in fact a spinel.

Although rubellites are in general more pink than rubies they are very attractive in their own right. Late Chinese Empress Cixi was very fond of them and bought a great quantity for gems and carvings from Californian “Himalaya” mine, that was just newly opened at the time.

As the renaissance took hold in Europe, scientific thought started to alter the field of gemmology. In 1756, Franz Aepinus studied the phenomenon of pyroelectricity in verdelites without recognising the gem species, as all samples were already cut by Dutch lapidaries. Rome de Lisle, an eighteenth century French mineralogist was the first one to correctly connect coloured stones with black schorl, already known in Europe for 200 years at the time. Then, as the gemmological knowledge expanded, appropriate tests were developed and this great gemstone started to be recognised in its own right. 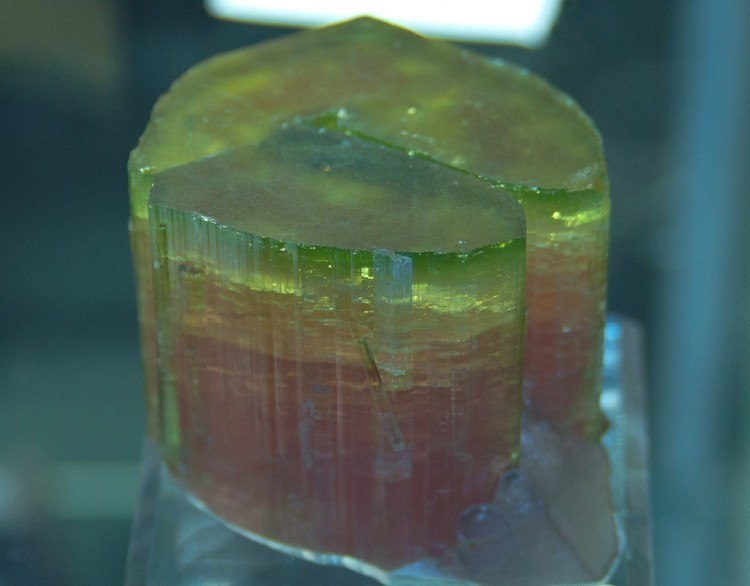 Over the years this fabulous gem had numerous uses, from pipe ash-drawers to pressure gauges on submarines but the number one always was and will be the jewellery.

Traditionally categorised as semi-precious, this fabulous gem gains popularity and acceptance as the demand for affordable stones grows. With a new exciting varieties being discovered and traditional colours coming from new deposits, Tourmalines’ future in coloured gemstone market is secured.

Browse our selection of tourmalines at Treasurion.com