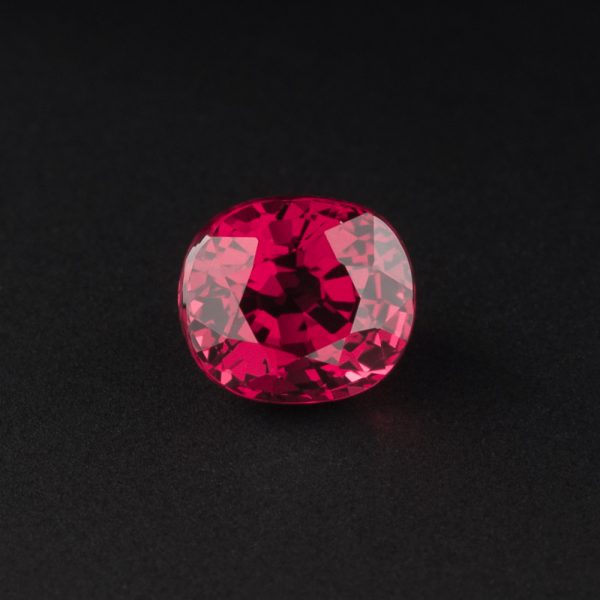 Ruby is a variety of mineral corundum.

Red hue it shows is caused by a trace amount of chromium in its atomic structure. Highly prized  throughout the centuries in Europe and Asia equally. Ruby is one of the most expensive gems and regularly attains record breaking prices at auctions.

When valuing ruby, its colour is the most important factor. Rich red with a touch of blue is the most expensive and desired combination. After that comes the clarity. It enhances a light reflection making the stone more brilliant and sparkly. Clean Ruby is very rare, even in high quality parcels most stones will show some inclusions. Then, you have to consider the size. Stones over 2ct are rare, over 5ct can command almost any price. Last but not least is the cut- well cut stone will appear much brighter and livelier than a poorly cut one. Origin of your gem can also play a role with stones from famous localities will command a premium.

Ruby can be enhanced in a lot of ways.

Heat treatment is widely accepted, as about 95% of all rubies are heated to some degree. This treatment is stable and practically traditional in some countries, like Thailand. There simply wouldn’t be enough rubies to satisfy the demand, without it.

Fracture filling is used to heal surface reaching fissures by filling them with flux that turns to synthetic ruby. Stable if preformed correctly but it affects the price quite significantly. Modern filling practices include lead glass treatment. Cheap and not very stable treatment used to turn non gem quality material into saleable commodity. These stones can be damaged by heat in jeweller’s workshop; acids- including substances as mild as a lemon juice and by everyday mechanical wear, since lead glass is much softer than the ruby. Value of lead glass filled Rubies is very low and we don’t recommend using them in general. Synthetic Rubies are also commonly used in jewellery after being first produced in 1840’s.

We only stock natural rubies and will always offer you a full disclosure.