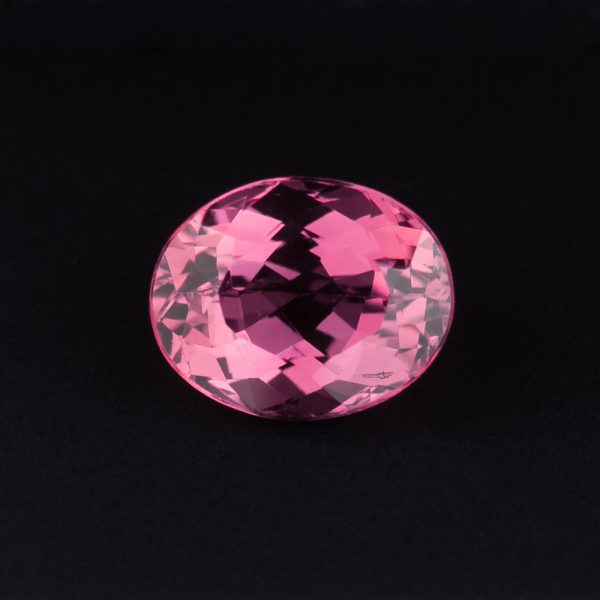 This Tourmaline has rich bubblegum pink colour. It’s virtually eye clean and very well cut, showing good light return. The size is suitable for a cocktail ring, or any other type of jewel.

Tourmaline belongs to a huge family of crystal boron-silicate minerals. The name comes from the Sinhalese word “Thuramali” (තුරමලි) or “Thoramalli” (තෝරමල්ලි), which was applied to different gemstones found in Sri Lanka.

It is available in virtually any colour you can think of as its structure can incorporate different chemical elements that change its hue. While most of its varieties are relatively cheap, there are some that are among rarest and most sought after gemstones on this planet. Tourmaline belongs to the trigonal crystal system and grows in elongated prismatic, three sided crystals with slightly rounded walls. Hardness of Tourmaline usually falls between 7-7.5 on the Mohs scale.

You must care about it if you think of everyday use jewel. You are in luck though, it’s not so hard to do really. So long as you don’t perform any physical activity that could result in abrasion or hard knocks to your gem, it should be just fine. Generally safe for ultrasonic cleaners unless liquid inclusions are present. It is; however, not recommended for steam cleaners. The best practice for gem cleaning is as usual, warm soapy water and soft brush is necessary.

Most of tourmalines are not treated but some may be heated or irradiated. There’s no way of identifying those treatments in tourmaline without expensive lab tests. As they are both safe and permanent the value of the gem is not generally affected. Synthetic tourmalines are not available in general trade as of this day, probably due to the complicated chemistry of this gem. Main sources of tourmaline, today, include- Brasil, Sri Lanka, USA, Afghanistan, Eastern Africa and Burma.